Sometimes the name of a species sends me a journey that makes me feel like a detective (maybe I could be a PI someday?). Some names are fascinating because of who named them, who they are named after, or some interesting aspect of biology. Just look into the naming of the blue crab, Callinectes sapidus, and you will find gain insight into natural history and the life and times of a pioneering scientist.

My most recent trip into species names is thanks to a worm, Arabella sp. [the “sp.” at the end means we really don’t exactly know the identity of the species…yet]

This beautiful worm is not usually abundant, yet we see it frequently on exposed rocky shores. The beautiful iridescence that can be seen along the worm’s body is captured in the name of the originally described type species: Arabella iricolor. “iri” comes from the Greek “iris” or “rainbow.”

I googled the genus Arabella and stumbled upon something that might hold a key for the origin of the genus name: Lady Arabella was a character in Bram Stoker’s horror novel, The Lair of the White Worm. 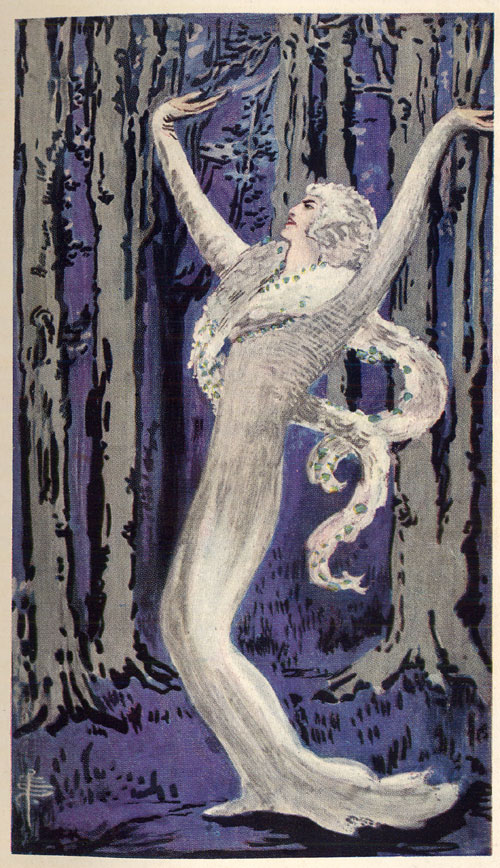 Illustration from the 1st edition of *The Lair of the White Worm*. Artist: Pamela Colman Smith. Public Domain, https://en.wikipedia.org/w/index.php?curid=31737480

Surely, there must be a connection! It was only then that I learned the origin of the genus Arabella predates the publication of The Lair of the White Worm. The worm appears to have been given this name sometime in the first half of the 19th Century, while Bram Stoker published his novel in 1911. Maybe Bram took a course in marine invertebrates? Sadly we’ll never know. To make matters worse, the novel was widely panned — Bram! — AND there is a fair bit of ambiguity in the origin of the given name Arabella. What’s in a name, anyway? Like Lady Arabella in the illustration above, I’m throwing my hands up for now.