I recently made a classic move in experimental marine ecology, scraping barnacles off of rocks. My main motivation was to set up a small experiment testing habitat use by snails, but I had another mission. I wanted to dissect a few barnacles to see if I could find any predators or parasites hanging out inside the barnacle shell (“test”). I’d been reading about a fly that only lays its eggs on barnacles, and when the larvae hatch they crawl inside barnacle tests to feed on the unprotected tissues and hide from waves (more on that in a later post, hopefully).

On this day, I found no fly larvae, but I did come across a cool parasite. At first glance, this grubby creature looked as though it could have been an insect larva. On closer inspection, the head, legs, and arrangement of segments made me think of a crustacean more than an insect.

This animal is most likely a female Hemioniscus balania, an isopod that lives as an parasite on barnacles. Isopods are familiar to many of us from their terrestrial incarnations such as woodlice (aka roly polies, pill bugs, or potato bugs), but they are an incredibly widespread and diverse group of crustaceans, occurring both on land and in nearly every environment in the ocean.

What makes this particular isopod so cool is its morphology, ecology, and life history. Its genus name, Hemioniscus, means “half woodlouse,” which I think derives from the fact that only the anterior (“forward”) portion of the animal resembles an isopod. When most isopods molt, or shed their old exoskeleton to reveal a new, slightly bigger exoskeleton underneath, they molt the posterior (“back”) half first and then their anterior half second.1 Somehow, this animal has incomplete molting of some kind that allows it to retain the typical isopod segmentation in front while turning into a giant blob in the back,2 a “mullet bug” of sorts (new common name, anyone?). 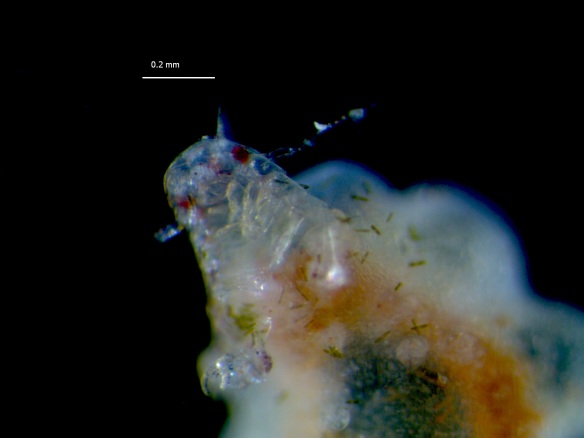 Young isopods are free-living males and look like typical isopods. They gain entry to barnacles and start to act as parasites. Eventually, they will turn into a bloated female like the one pictured above.3 Here’s where it gets crazy. They feed entirely off of the ovarian fluids of the barnacle, preventing the barnacle from making eggs and shunting a lot of the barnacle’s precious energy directly to the parasite. This is where the term “parasitic castration” comes from. Since barnacles are simultaneous hermaphrodites, they can still function as a male, but you can imagine this form of parasitism could have major impacts on barnacle populations.4

Reproduced from Blower and Roughgarden 1987

3- see Crisp, D.J. 1968. Distribution of the parasitic isopod Hemioniscus balani with special reference to the east coast of North America. Journal of the Fisheries Research Board of Canada 25:1161-1167.